In memory of Kit-Kat 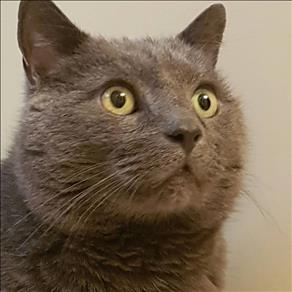 Kit-Kat was a loving, gigantic grey cat that we rescued from the streets 12 years ago. In his time with us, he ruled with an iron paw.

This page is for Kit-Kat, a 7 kilo monster of a cat that we rescued from the streets 12 years ago. When we took him in he was a starving stray, who slept underneath cars and wouldn't let us touch him because someone had been abusing him. However, he grew rapidly in both confidence and size, and ended up becoming the most loving furry overlord imaginable.

Kit demanded that he be the head of the household, adopted a favourite armchair that nobody else could touch, and sat up at the table at dinnertime to peek over our shoulders and beg for food. He realised quickly that his dark grey colour made him blend into the dark, and used this with great enjoyment to hide at the top of the stairs at night and claw people's ankles as they walked up. It became an established routine in our family when going upstairs to look out for his glowing green eyes (the big giveaway), and then dodge the outstretched paw when he struck at impressive speed. He didn't like other animals and pretended to have only a grudging tolerance for humans, but would follow us around endlessly and throw sulks that lasted for days if we dared to go on holiday and leave him. If anyone was bold enough to try to deny him entry to a room, he would headbutt the door like a gigantic feline battering ram until it gave way. Headbutting was his favourite form of coercion; he shoved the full force of his bulk into barriers and people alike until he got what he wanted. I got used to hearing my door slam open in the dead of night, before a grey boulder launched itself onto my bed and began persistently bashing my head and side until I let him curl up in my arms and fall asleep. He repeated this every day at 6am, when he decided that it was time for his breakfast.

Our lives were plagued by a grey menace, and we wouldn't have had it any other way. Kit began declining in the past few months, and became significantly less chunky. In fact, it was the first time that I was actually able to see that he had a neck. After being in perfect health for 12 years, Kit passed on the 16th August. He remained stubborn to the very end, holding on through the night so his family could be with him. Just as he'd always lived life exactly as he wanted, he refused to go out on anything except his own terms.

We don't know how old Kit was, but he could have been aged up to 19. When we took him in, the vet told us that he had likely been wandering alone for several years. Kit leapt at the chance to have a family, and even more so when he realised he could bend them to his every whim. Over those 12 years, he showered us with love even as he clawed us, broke into food cupboards, and tried to shove us out of our own beds so he could have more space (seriously, he took up half of a double bed). I can only hope that we showed him as much love, and that his days alone were long forgotten by the time he passed. In his memory, this page has been set up so that another cat might bring the joy to a family that Kit gave us.