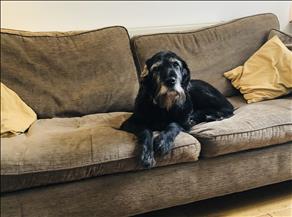 Polly was the dog of my heart. The scruffiest, smelliest, most standoffish labradoodle with the slimiest beard. She made our family complete

God, I loved her. The feeling wasn’t mutual; she… tolerated me, but that didn’t matter because my love for her was pure and unselfish. She brought out the best in me – with her, I was patient, tender, affectionate, demonstrative; all qualities that don’t come naturally elsewhere in life. I have so many doubts about myself, generally – as a mother, a wife, a friend, a writer, a useful member of society - but never doubted my abilities as a dog-parent. I nailed it. Now it’s come to an end, there’s another gap, because that was a thing I did well, and it’s gone.

She did so well herself, right to the end. Even at fourteen she would happily trot round the park with us, leap onto the sofa for a snooze, trundle up the stairs to snore beside our bed. But when she got to her feet, her back legs would stretch painfully, stiffly, like the Tin Man rusting up. Her final decline was rapid. We called a palliative vet, who came to our home. We held Polly’s paws, stroking her head, murmuring words of love and reassurance she couldn’t hear. I kept wishing for a miracle; something would save her in the nick of time. But a few seconds later she was gone, gently into that good night, and we were left in a house that felt empty, full of gaps and silences.

That was three months ago, and we’ve been wallowing in the ashes of it ever since. Gazing at the spaces she occupied, thinking of the times she tottered into the kitchen, wonky tail wagging, savouring the smell of her as I kissed that flat, bony head. The biggest gap is inside me, a light snuffed out, darkness all that remains. Every day, I read about the horrendous, unspeakable, appalling things happening in the world. A beloved old dog dying peacefully at home is not on the scale, and yet I can’t shake it off. My happiness was so dependent on her existence, like a base layer of warmth and comfort that kept everything else ticking over.

Everyone says it will take time, that things will get easier. Part of me doesn’t want it to. I feel like if I hang on to this pain, there’s a chance it might be alleviated by her return. I look for her all the time, catch sight of a pile of washing on the bed and get a jolt of recognition. Followed by the slump of realisation - it’s not her, and she’s not coming back. As the initial shock wore off, another, quieter, sadness replaced it. I miss her more, because it feels like such a long time since I’ve seen her. It feels like I have a constant lump in my throat, always aware of that empty space where she should be.

Not a tragedy by any means. Just a gentle, peaceful send-off. But she was good and true and beloved, so I must mourn her as she deserves.